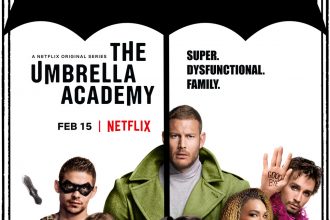 The new series “The Umbrella Academy”, which runs for 10 episodes, was released to Netflix on Feb. 15. Since the release, the show has grown continuously in success because of how it is different from any other superhero TV show or movie. The show is based on the Dark Horse comics by Gerard Way.

In the show, 43 babies are born on the same day, in 1989, to mothers who weren’t pregnant when the day started. Out of the 43, billionaire Reginald Hargreeves (Colm Feore) adopted seven of them.

Their father ranked them in order of their usefulness to him. Number 1 is Luther (Tom Hopper), who has super strength and was sent to the moon for the past four years. Number 2 is Diego (David Castañeda), who has a special talent with knives. Number 3 is Allison (Emmy Raver- Lampman), a celebrity who can change reality by spreading “rumors”.

Number 4 is Klaus (Robert Sheehan), a junkie who can see and communicate with the dead. Number 5 who doesn’t have another name (Aidan Gallagher), a 58 year old man trapped in his own 13 year old body because he time traveled to the future when he was 13 and was trapped in the future for 58 years. Number 6, Ben, was killed in an unidentified event before the series began. Lastly, Number 7 is Vanya (Ellen Page), a violinist who has no powers and was excluded from activities with her siblings because she was “ordinary”. Reginald Hargreeves trained each of them vigorously to be crime fighters.

As they grew, most of them left the academy (mainly because of their issues with their dad), but the unexpected death of their father brought them back together for an important mission. Things start to get chaotic when they try to set aside their differences and get along in order to stop the apocalypse, which Number 5 witnesses in the very-near future. Throughout the show the narrative jumps around in time and place in order to reveal background stories to fill in the gaps about their collective past.

“I was hooked from the start,” sophomore Cindy Ulloa said. “I was on the edge of my seat during every episode because there are so many plot twists, and every episode ends with a cliffhanger, I can’t not go on to the next episode.”

The show has some flaws, but nonetheless it makes up for it by not dragging the scenes on for so long but instead get right to the point. The series lands right in the sweet spot between comedy, drama, and sci-fi. The finale is perfectly designed so that you’ll be impatiently waiting for the second season.

The show was named as the most successful digital series of 2019 so far, so inevitably Netflix has reportedly renewed “The Umbrella Academy” for a second season as of Feb. 27.