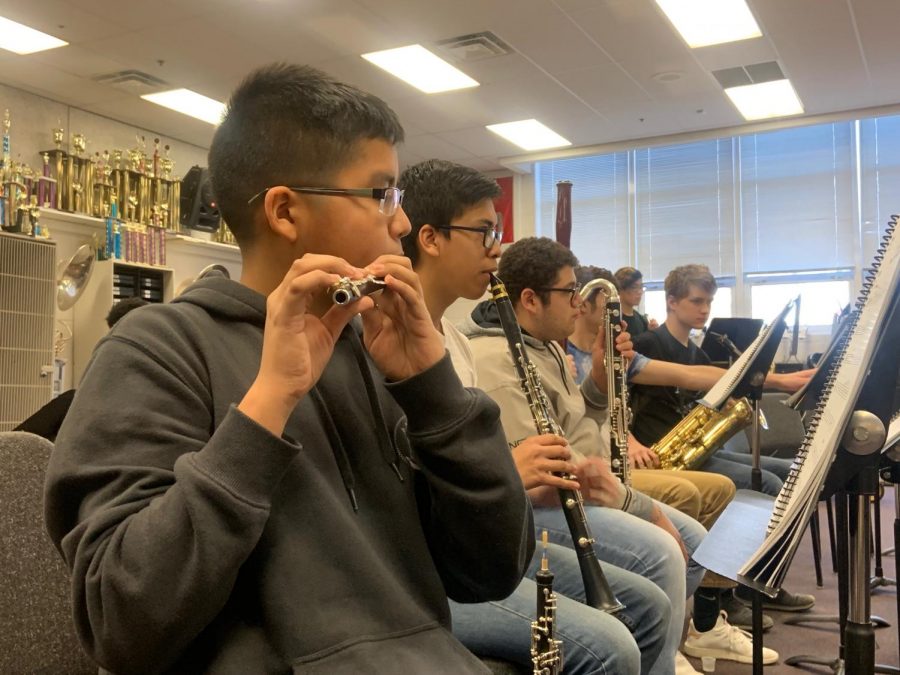 Freshman Andrew Zurita plays the flute during the pit rehearsal.

Now most people think that being a part of a musical requires one to be either: a. a good actor, or b. a good stage hand, ready to take on any assignment or task that the directors and/or stage managers ask them to do. Of course taking part of a musical includes multiple other roles that are not limited to either of these things, but what most people don’t consider is the fact that one could also join the pit.

The pit is a composition of roughly 20 talented musicians from orchestra or band who join together to create the music for the actors to alongside.
“I think my experience will be similar to last time, because you still carry on with the idea of supporting theatre and making music as well,” said junior Jackson Ramos.

Though the pit combines multiple skilled musicians from multiple grade levels, it doesn’t run as normal band or orchestra classes do.

Normally, the musician would need to come in with their music already learned or rather rehearsed before hand so that the pit would be able to only practice as an ensemble and not focus on individual parts of the song that would require more work.

In each rehearsal, starting around 4:30 pm and lasting roughly two hours, it allows each student to individually prepare their instrument and use the remaining time to prep for the music that they would go over in that specific rehearsal. With everyone working on the production of Seussical, or any musical in general, each artist (whether it be an actor or specific musician) needs to have an understanding of the basic elements of the music or scene.

Since Seussical incorporates an integration of various instruments, there is time allotted in the rehearsal focused on the ideas of the music.
“We’re using a program called rehearscore that the singers are using as well, that kind of has some of the background music already,” Witkowski said.

Musicians would first listen to the recording of the song that they would soon be practicing, then learn the essence of the song: the pauses, breaks or pulses.
Aside from this, the pit players need to learn how to not only learn their music, but to also understand it enough since the music may slightly change due to the movements of the actors.

“I think my experience will be similar to last time I was a part of pit,” junior and cello player Ramos said. “You still carry on with the idea of supporting theatre and making music as well.”