Twitter is doing the right thing for the public 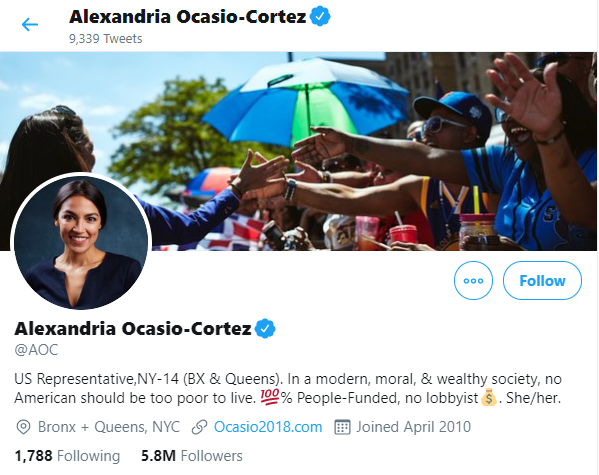 Alexandria Ocasio-Cortez, popularly known as AOC, is an American politician and activist who serves as the U.S. Representative for New York’s 14th congressional district. The district includes the eastern part of the Bronx and portions of north-central Queens in New York City. She is a member of the Democratic Party. # of followers: 5.8M # of tweets: 9,344

Social media websites have always been a platform for companies and campaigns to get their messages out into the world. Political advertisements become more frequent around elections.

CEO Jack Dorsey announced that Twitter would stop political advertisements in response to the spread of misinformation that has been plaguing the internet.

Twitter has not agreed upon the official policies, but Dorsey says they will take place in November.

This is a huge public relations win for the company.

Facebook is currently embroiled in a debate over its decision to allow political campaigns to push advertisements containing misleading facts.

The company has said it does not think it should be the arbiter of political speech, though it does stop companies and political committees from using false information in ads.

Facebook’s CEO Mark Zuckerberg said that no changes will be made to their political advertisement policy.
Although, some politicians and consumer watchdog groups have asked the company to reconsider their stance.

It will be nice now that unwanted political ads will not be forced into everyone’s Twitter feed. No longer will candidates agenda be pushed on the unsuspecting public.

Most of the ads on social media give false information anyway.

Last month, Joe Biden asked Facebook to take down an ad by the Trump campaign that included false information about him.

Facebook declined the request, which is what started this.

Facebook should reconsider changing their policy because if they are responsible for spreading even more false information into the world, they might not be able to bounce back.

Candidates tend to spend more money on Facebook ads due to the fact that more active voters frequent Facebook.
For example, Trump has run not a single ad on Twitter for one week, while he spent nearly a quarter of a million dollars on Facebook over the same period, according to the companies’ archives.

Banning political ads will not hurt Twitter. The ads only make up about 1% of total revenue.

In the 2018 midterms, only $3 million was made from political ads out of an estimated $3 billion.