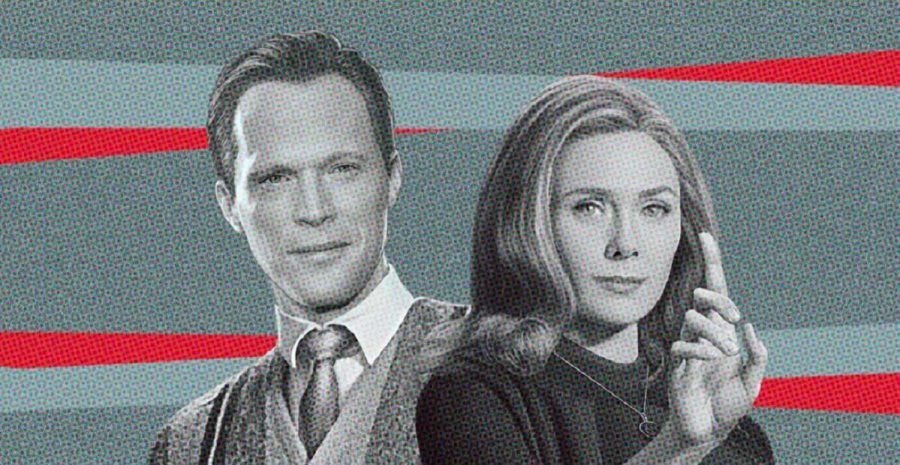 After remaining relatively silent through 2020, Marvel studios opened up in 2021 with WandaVision, a sitcom based on Wanda Maximoff, otherwise known as Scarlet Witch, and Vision. WandaVision stars Elizabeth Oleson and Paul Bettany, with supporting actors including Kathryn Hahn, Fred Melamed, Debra Jo Rupp, and the yet-to-be-seen Evan Peters, who will most likely be reprising his role as Quicksilver.
On the surface, Wandavision is a comedy in the style of late 40’s early 50’s sitcoms, complete with black and white pictures, studio audience, and stiff camera placements.

However, when you dig a little deeper, there is a lot more going on under the surface than you may expect.
WandaVision is a uniquely fun blend of I Love Lucy, The Truman Show, and Twin Peaks. While the light-hearted tone and frequent corny dialogue might lull you into a sense of nostalgic comfort, don’t be mistaken.

There is something deeply sinister going on beneath the surface here. The first episode establishes the location, the characters, and the tone of the show, with a fairly boilerplate plot that involves a dinner party gone wrong. However, when Visions boss Mr. Hart starts choking, things start to get a little creepy.

Episode two focuses on a talent show gone wrong. Wanda and Vision are struggling to fit in as they meet their new neighbors, but eventually win them over.

There are a couple of brief moments of weirdness in this episode, but the creepy aspect doesn’t kick in until the end, where, with the least amount of spoilers possible, things start to get weird. Color starts to kick in, strange thumps can be heard, and there is a reveal towards the end that, quite frankly, I still don’t understand.

The way that both the camera and the actors adapt to the many different tones of this show is really impressive. Going from cheesy Leave It To Beaver levels of overacting to extreme discomfort at the drop of a hat is not an easy feat for any actor.

The stiff, stationary sitcom camera switching to tight close-ups of freaking out characters is downright unsettling. There is something fluid about the way this show can switch its tones so effortlessly. For me, Debra Jo Rupp steals the first episode with a horrifying, Kubrick level freak-out.

The way that both the camera and the characters react to what’s going on gives an almost meta feel to WandaVision.
The first two episodes leave the viewer with a ton of questions, and it’s intentional.

The way that information is slowly revealed and laced so seamlessly into the sitcom facade feels almost David Lynch to me.

Admittedly, I’m not the biggest fan of Marvel, but WandaVision has my mouth watering for episode 3.
I can’t wait to see where the series is going, and for it to explain what half of it even means.

My only hope for WandaVision is that it doesn’t dumb itself down. I hope it continues to confuse me and not show me its full hand, and I hope that some questions never get good answers.

A sitcom was the perfect framework for this story, something so lighthearted and innocent that it feels like the darker aspects is truly invasive.

“It’s slow, and there’s a lot of build-ups, but I’m excited to see what the result of it all is,” said junior Audrey Barnes. “It’s gonna be cool to finally understand what’s happening with Wanda, and why she and Vision are even in that town in the first place.”

Other students aren’t as sold.

“Honestly it was really weird”, said senior Lizzie Earhart “I’m not invested yet, but it has potential. I like the sitcom parts,” she added, “They were funny and creative to me.”

Wandavision is released weekly and is set to have 9 episodes in season one. Wandavision is a must-watch for any Marvel fan who’s in for a mystery.