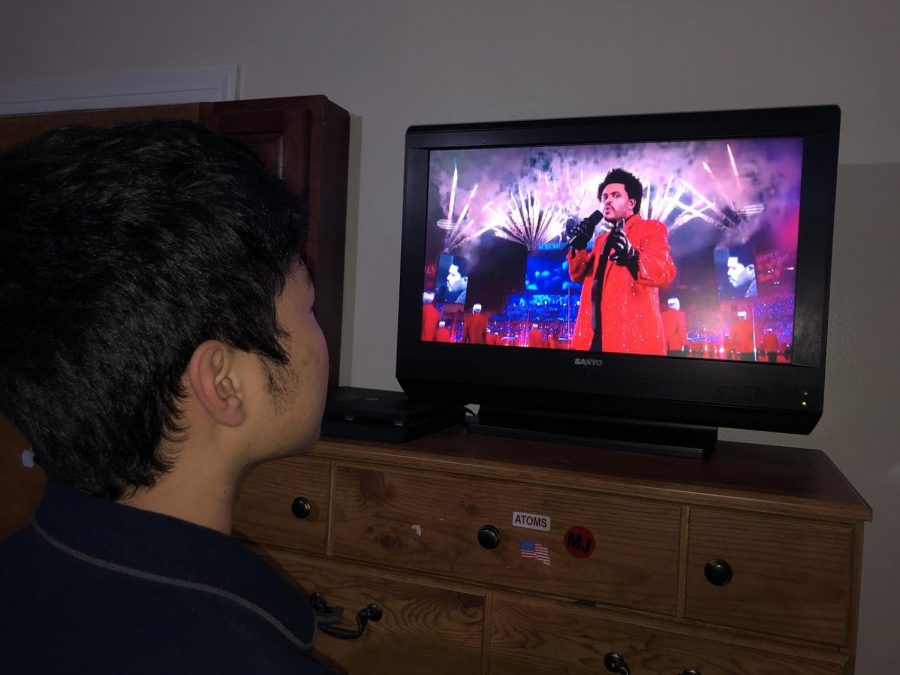 The Weeknd, a 30-year-old Canandian singer, has had a year like no other. His fourth studio album debuted at number one with multiple songs on the album spending weeks on the Billboard charts. His spotlight continued as he performed for the Super Bowl LV halftime show.

“The Weeknd is one of my favorite singers, so I already knew that it was going to be a good show,” senior Abraham Belayneh said.

The performance was filled with colorful lights, fireworks and a background set similar to a Las Vegas scene.

The singer used the limited in-person attendance to his advantage by beginning the performance in the stands of the stadium. However, there seemed to be audio issues as it was hard to hear the singer.

“At first, I could barely hear him,” senior Nicholas Bellem said. “That audio balancer needs to be fired.”

As the show went on, the audio got better and the singer continued with his energetic performance.

It seems that The Weeknd couldn’t stand still as one moment he was in a room covered in lights and the next minute on the center of the Tampa Bay football field.

The song lineup consisted of hits throughout his career, such as “The Hills,” “Earned It” and “Starboy.”

“I like how he played a variety of his songs, but I wished he would have brought a special guest like Nav,” senior Jason Kim said.

Due to COVID-19 protocols, only his production team could join him on the performance. However, it appeared that The Weeknd didn’t need anyone else as even his own dancers were dressed in a similar fashion as him with bandages on their faces.

The performance ended with an impressive sight as The Weeknd sang his most recent hit, “Blinding Lights,” while fireworks went off behind him.

Quickly, fans went to social media such as Twitter to praise the singer. The performance also caused its fair share of memes though, from when he is singing in the light-filled hallways.

— Niky Falques (@NikyFalques) February 8, 2021
Nevertheless, most approved of the performance.

“The halftime show wasn’t that special, but The Weeknd really showed off why he’s one of the most talented in the music industry,” junior Jin ho Rodriguez said.