Rehearsal starts for the fall play 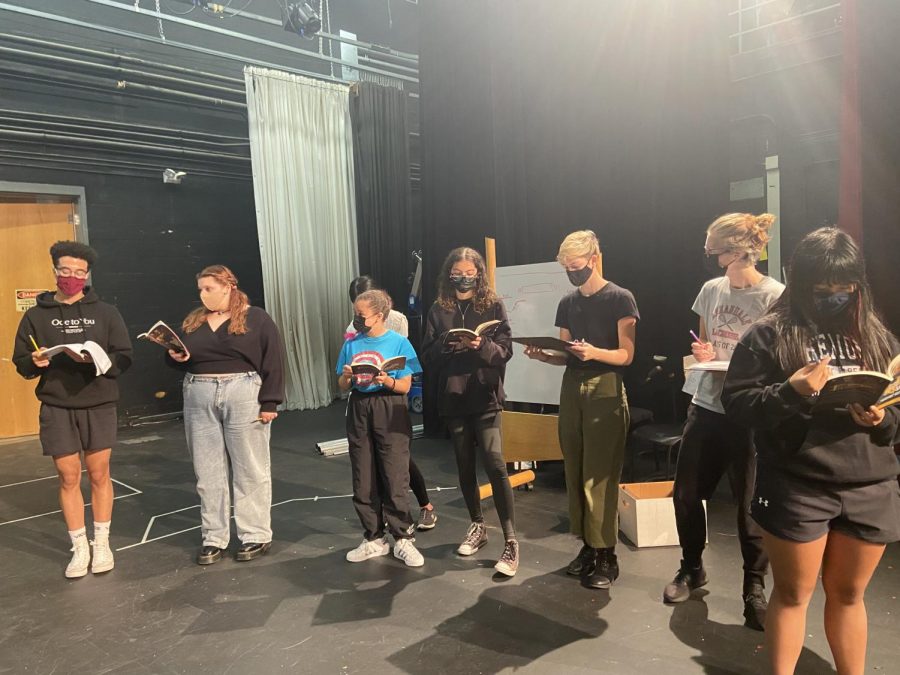 The pandemic created a pause to live theater, and this will be Annandale’s first live production since. Actors and tech are working everyday after school and on Saturdays to prepare for the performance. Actors have been blocking their scenes, memorizing their lines and working together to create a special performance.

Opening night is Nov. 18 and the performance runs until Nov. 21.

“I hope the audience has just as much fun watching, as [they] did making it,” Brunberg, the director of the Puffs production said.

The full title of Puffs is called Seven Increasingly Eventful Years at a Certain School of Magic and Magic.

Puffs is a play where the character Wayne Hopkins is sorted as a Puff. In this case, Puffs are actually the hated house.
Hopkins was a boy who lived in New Mexico and found out he was going to a school in England.

Since Wayne and the other people in his house are Puffs, they want to be wizards and witches. They want to defend themselves against evil and malicious attacks.

“I’m excited to finally have a live audience after a year of only virtual theatre,” Brunberg said.
Sophomore actress Hang Minh Nguyen is playing one of the characters called McG (McGonagall). There are some of the same and different aspects of her character.

“I hope everyone has fun and that the play is a success,” Nguyen says. “I’m mostly excited to get all my work done, up until the actual play.” She auditioned for her role by memorizing two monologues and did different voice snippets.
“Rehearsing has been pretty fun, it’s been everywhere these days, and it’s just a really funny process because a lot of funny things happen,” junior Atlas Martindale said

Junior actor Timothy Hurd is playing five characters. He’s playing Mr. Voldy (the same as Voldemort aka You-know-who), a dragon, a sports fan, the 1st headmaster and Fat Friar. He hopes the audience likes the play. For him, rehearsal has been fun.

“So far we haven’t really started, I think we’ve only been rehearsing for about like a week or two.” Hurd said. “But it’s been fun, getting to explore the different characters because everyone has their own thing and the thing is with our characters, no one person is not important. So every single part here, we rely on them.”

Performers, tech and teachers are excited to be apart of the live theater atmosphere again. Being able to perform for friends and family live is a great way to build community in students. The performers of the play have put in great amounts of effort into this production.

They hope you will come enjoy the show taking place Nov. 18-21 in the AHS auditorium.