DC Comics The New 52: What happened? 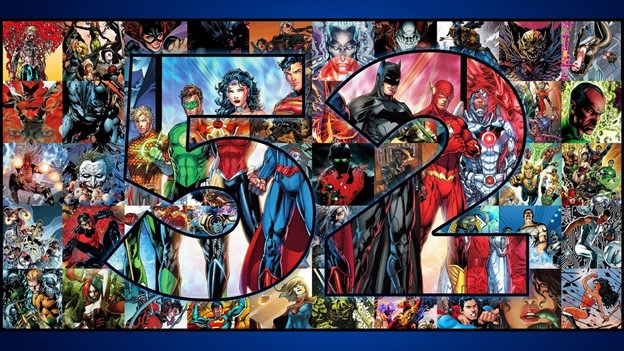 Sometimes, things are in need of a fresh start. A film or a video game from years ago may get the treatment of a reboot or remake. Usually, reboots and remakes are a great thing as it brings in a new audience to an already existing franchise.
Comic books are like that too, except DC Comics’ idea of a reboot has its entire universe and characters rebooted. They first began doing this with the 1985 Crisis on Infinite Earths event.
Writer Marv Wolfman wrote the Crisis on Infinite Earths event that had the DC Universe against the Anti Monitor which would decide the fate of the multiverse.
At this point in time, DC Comics had way too many universes and storylines that stretched across 50 years in comics; and so, by rebooting the DC Universe this allowed for storylines to be condensed and retcons were made to adjust decisions writers weren’t happy with. Flashforward to 2011, DC Comics reboots their universe again under the trademark “The New 52.”
The New 52 was initiated by two storylines: Flashpoint written by Geoff Johns and Final Crisis written by Grant Morrison. Flashpoint had the Flash enter the speed force and travel to Earth Two where he meets Thomas Wayne as Batman and faces off against Reverse Flash which shattered the DC Universe timeline forever. Final Crisis saw the arrival of Darkseid as he gains possession of the Anti-Life Equation which brings together the Justice League as they stop Darkseid from conquering Earth and the multiverse.
The idea of the New 52 was, once again, DC Comics rebooting its entire universe and characters to bring in a new audience; however, there were two characters that didn’t receive the treatment to a full reboot: Batman and Green Lantern with both their storylines (i.e. Brightest Day, Blackest Night, and Detective Comics) intact.
While this helped newer audiences jump into the DC Universe with a fresh slate of characters and stories, older audiences were not pleased with the overall outcome of The New 52. So much so, that it left the community divided until the beginning of DC: Rebirth back in 2016. So, what happened with The New 52? Why was it so divisive among the community? The problems of The New 52 stem towards two factors: continuity and retcons.
Continuity in comic books has always been a problem considering that there are so many characters and stories that get connected to each other to create a large, cohesive story and universe. The New 52, for the most part, was a discombobulated, convoluted universe simply because DC Comics didn’t know what stories, more specifically older stories, should be considered canon.
For example, Blackest Night written by Geoff Johns established Volthoom, the first Lantern, and his Power Ring. Later, in Forever Evil also written by Geoff Johns established that Harold Jordan and Jessica Cruz possessed Volthoom’s Power Ring, but there were no connections linking both story’s rings into continuity as the same ring. So now, technically speaking, you have two Power Rings running around in the same universe all because Geoff Johns never connected Forever Evil and Blackest Night’s Power Rings into continuity.
Retcons in comic books happen every-so often where a writer may change something in a character or story’s history to better fit into their run. Retcons are a great tool for writers to fix continuity issues; however, DC Comics didn’t exactly get the memo when it came to The New 52.
With DC Comics not necessarily knowing if older stories should be considered canon, DC Comics remade them instead with retcons being made to certain plot points or characters to “spice things up” for newer readers. On one hand, this introduced newer audiences to many older and classic stories now modernized. On the other hand, however, this angered older fans as it just wasn’t the same story or characters they remember.
A perfect example of this was Batman: Killing Joke written by Alan Moore. In Killing Joke, when the Joker greets Barabara and James Gordan unexpectedly at their home, he shoots Barabara through the stomach paralyzing her and leaving her to die while taking her father. In the New 52 iteration, James wasn’t there with Barabara and a henchman ended up calling James about the shooting. Fans were outraged about this major change to the story because it takes away the entire significance of Killing Joke and James Gordan’s role in the story.
While The New 52 certainly wasn’t successful across the community, it definitely was an interesting experiment for DC Comics. The New 52 officially concluded with the Convergence event written by Jeff King and Dan Jurgens
Even after the Convergence event, The New 52 went on with 24 new titles being released in June of 2015. Writers at DC Comics knew about the community outrage, so they weaved in all the continuity and retcon problems into a colossal event involving Doctor Manhattan that would transition DC Comics into its next phase: Rebirth.